The Italian art of stylish nonchalance—slim suits, bare ankles and provocative color combinations—is steadily influencing American style. How you can mix and match like the best of them 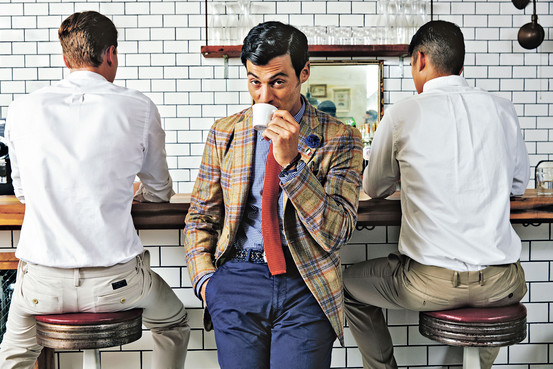 WHEN AMERICAN MENSWEAR editors and retailers come to Milan for the biannual fashion shows, they get a double feature. The main event is on the runways, and the second act is found right on the city’s cobblestone streets, where Milanese men put on their own display. Ever since Italians have been zipping home from the office or cafe on their Vespas, visitors have been studying them in an attempt to unravel their secrets.

What’s behind the Italian man’s fearless way with color? Where does he get his uncanny knack for combining pebbled textures with silky trimmings? How does he manage to be so secure in those slim-fitting clothes? And how does he put it all together with a refined sense of sprezzatura (Italian for “studied nonchalance”)?

Style “is more important to Italian men than it is to men of other countries,” said Saks Fifth Avenue president and chief merchandising officer Ron Frasch. “They’re raised from a young age to appreciate quality and design.”

“Everything fits,” said Details magazine fashion director Matthew Marden. “That’s the first thing I noticed when I started coming here. [In America,] the businessman in a suit is a completely different idea than it is in Italy.” 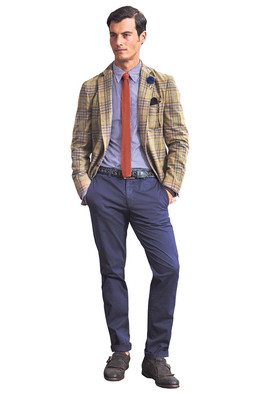 Or rather, it was. Change is afoot stateside as Italian-influenced elements steadily gain traction with the regular guy—one far removed from insider fashion circles.

“It’s beginning to happen in America,” said Mr. Frasch. “We see younger men who are much more interested in wearing suits than they used to be. The suits are slimmer. Even our more classic customers are [interested] too. Men are buying fashion. When they’re buying a work suit, they’re looking for a more interesting option—textures or novelties.”

Mr. Frasch also reported an “explosion” in high-quality footwear, suggesting that, like the Italians, Americans are wearing fine shoes beyond the confines of the office or formal event. “Double monk [straps], single monks, wonderfully burnished shoes that really make a statement,” said Mr. Frasch. “And that’s fairly new, really only in the last year.” Other small but crucial Italian obsessions like lapel pins, pocket squares, scarves and bold socks are also flying off the shelves, according to Mr. Frasch. “The average American guy is starting to want to be appreciated for being well dressed and smartly put together.” Color, another Italian essential, has also become a big seller for Saks—suits in brighter blues, unusually hued shoes or even footwear with neon soles.

Mr. Frasch isn’t the only retailer to observe the foreign-exchange phenomenon. “Think of how many times you look down and see beautiful shoes with a properly trimmed pant without socks,” said Barneys executive vice president of menswear Tom Kalenderian, who has been traveling to Italy for work for 30 years and has seen the Italian influence in the U.S. grow over time. “That popped up in Italy first. Remember when men started doubling a scarf and looping it around their neck? The first time I ever saw a man do that was in Italy.”

The list of American-adopted Italian practices is lengthy. “Wearing driving shoes with a suit, wearing brown tones head-to-toe, mixing patterns, slimmer trousers, shorter jackets, bright blazers, colored cotton suits,” Mr. Kalenderian said. “They were the first to pull the lining out of the jacket. They adjusted to all of these things first. It moves fast there.”

“It isn’t to say the British, French, Americans or Japanese don’t have style,” he continued. “We’ve just learned a lot more from the Italian lifestyle. Paris gives us runways but Italy gives us real clothes.”

THE BIRTH OF COOL

Is there something in the acqua that explains this mass display of rakish refinement?

Not exactly. It partly reflects the country’s small size relative to its very saturated fashion industry. Imagine if the state of California (which encompasses 156,000 square miles compared with Italy’s 116,000) not only boasted an internationally acclaimed men’s fashion week (like Milan’s) and great tailoring traditions in five major cities (on par with Milan, Rome, Naples, Palermo and Turin), but also high-class clothing stores in nearly every one of its small towns.

“Much of what we’re talking about focuses on heritage,” said Mr. Kalenderian. “In Italy, [being in fashion] is almost like being in the wine or cheese business. The dexterity of the designs and the quality is so specific to the region, [manufacturers] are convinced that the water, temperature and air is all linked to the end product.” He added that Barneys is reintroducing Luciano Barbera, a brand launched in 1971 by Mr. Barbera using fabrics from his father’s Piedmont mill.

Though one could trace the roots of Italy’s style to the aesthetically robust Renaissance, the modern Italian taste for individuality crystallized in the ’50s and ’60s around style giants like former Fiat head Gianni Agnelli, actors Marcello Mastroianni and Gigi Rizzi and the younger Mr. Barbera. Not only were their fashion habits—watches worn over the shirt cuff, suede driving shoes paired with handmade Caraceni flannel suits, slim black suits worn with black sunglasses—replicated at large, but their pleasure in living was the source of much imitation. Without the attitude, after all, the effortlessly fabulous look would have been impossible to pull off.

“Americans didn’t live the 1950s and ’60s like we did,” said designer Massimo Piombo, whose obsession with the glamour and elegance of years past inspires his label, MP by Massimo Piombo. “In Italy there was this extreme joie de vivre. It was poetic, extravagant and the extreme beauty and decadence inspired amazing garments.”

THE ART OF ADAPTATION

Though times have changed—local manufacturing has lost ground to the Far East and la dolce vita isn’t nearly as sweet—Italians are still brilliantly deft at merging high style with everyday life. “They’ll put on a beautifully cut suit, jump on a motorcycle and zip off to a meeting,” said Mr. Kalenderian. “No one in America does this.”

As Robert Rabensteiner, fashion editor of L’Uomo Vogue, noted, Italians are typically the first to take something they see on the runway or on another man and make it their own. They are now on to the trend of trim double-breasted suit jackets worn with slim white jeans. They have also taken to velvet slippers and wearing silk scarves in place of ties. Another relatively new phenomenon is “spezzato,” which literally translates as “broken in two,” and describes the mixing and matching of a jacket from one suit with the pants of another, perhaps in the same tone but with a different texture.

“Italians love to look up to someone. They are always looking at [each other],” said Mr. Rabensteiner. “So when they see someone with red socks, they say, ‘Hmm.’ Two months later, they are wearing red socks.”

The first lesson is to get comfortable with clothes that fit the body well. “It isn’t true that a fitted suit will be uncomfortable,” said Dario Spadea Pandolfi, menswear buyer for Milanese department store Excelsior. “Especially if it’s made by a tailor or by hand.” It is time to stop swimming in your suit: Look for a slightly shorter jacket with a trimmer waist, and pants with a tapered, shorter leg—to show off bright socks or a sliver of bare ankle.

Next on the shopping list: polished shoes with thick laces, to be worn with jeans or chinos. Church’s Shoes, founded in England but now Italian-owned, is one of the most popular brands. Try them with navy Incotex chinos that are tapered down the calf. Lastly, another Italian item that is easy to adopt as summer transitions into fall is the unstructured, lightweight jacket made by Boglioli. It offers Italian ease, comfort and polish in a single piece, and can be worn in varying levels of formality, paired with everything from tapered jeans to tailored trousers.

To take your look to the next level, try pairing Arfango velvet slippers with your slim suit or folding a silk scarf around your neck instead of a tie.

There is always more to be learned about the art of mixing color, pattern and texture in the components of an ensemble. Try combining different textures in a single tone: a navy Cesare Attolini jacket with dark blue Incotex pants and a deep blue fine-knit polo. The best advice might be to have a look at modern Italian style icons, like Fiat heir and entrepreneur Lapo Elkann, who gives his grandfather Gianni Agnelli’s classic suits a madcap spin. There is also Luca Rubinacci, a third-generation-member of the Rubinacci tailoring dynasty and designer of his own line, who pulls off purple corduroys as if they were Gap khakis, and keeps egg-yolk yellow and baby-pink jackets in frequent rotation.

“That probably won’t be everyone’s daily bread,” said Mr. Kalenderian. An American guy who’s just getting the hang of dressing a little more colorfully should take a page from the Italian playbook and not force the issue. “If it doesn’t fit their lifestyle, they don’t wear it,” said Mr. Kalenderian. “That’s the definition of Italian style.”